Growing old doesn’t make you smart, just smarter than you were in your youth.

That said, I have lived through eight decades, so the advice I offer - you can take it or leave it.

I have seen the environment drastically change since the time of my youth and young manhood. The water and the air have become more polluted, and the earth is warmer, causing many species of animals and insects to migrate north.

In the first Native village we lived in in 1985 we were informed that the well, which was located among Oil storage tanks, was polluted and that we should draw our water from a second well located in the center of the village.  A few weeks later we were told that the well in the center of the village was polluted and that we should boil the water (there were one-hundred-fifty people in the village and at least that many dogs.)  We ordered our first water distiller from a company called Water Wise, and have distilled our water ever since.

When we lived in Kentucky there were signs on the Ohio river warning people to limit the number of fish they should eat from the river and for pregnant women to avoid eating river fish.   Now here in Maine, the Fish and Game department has the same warning in their literature.

In the last Native village we lived in, there was a gold mine to the north and a platinum mine to the south.  People ate fish from the river and there was a high cancer rate in the village.  We distilled our water.

Likely, most water sources on this earth are not fit for human consumption without extensive treatment. To me, distilling our water is a health precaution. 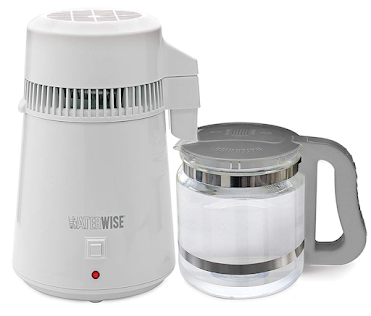 I don't advertise for any product - just share my experience of products I like.
This is our unit and cost about $350.  The unit is dependable and last for decades.  We distill a gallon a day, which adds about $15 a month to our light bill.

There are eight billion people in the world and our water supplies are finite.  There could be a future time when wars will be fought to control water sources.